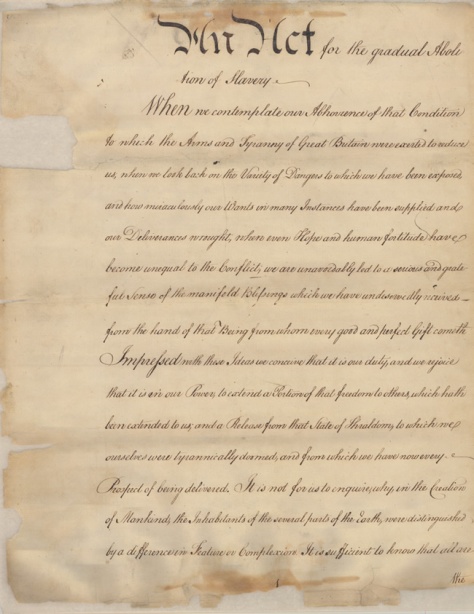 An Act for the Gradual Abolition of Slavery

When we contemplate our Abhorence of that Condition to which the Arms and Tyranny of Great Britain were exerted to reduce us, when we look back on the Variety of Dangers to which we have been exposed, and how miraculously our Wants in many Instances have been supplied and our Deliverances wrought, when even Hope and human fortitude have become unequal to the Conflict; we are unavoidably led to a serious and grateful Sense of the manifold Blessings which we have undeservedly received from the hand of that Being from whom every good and perfect Gift cometh. Impressed with these Ideas we conceive that it is our duty, and we rejoice that it is in our Power, to extend a Portion of that freedom to others, which hath been extended to us; and a Release from that State of Thraldom, to which we ourselves were tyrannically doomed, and from which we have now every Prospect of being delivered. It is not for us to enquire, why, in the Creation of Mankind, the Inhabitants of the several parts of the Earth, were distinguished by a difference in Feature or Complexion. It is sufficient to know that all are the Work of an Almighty Hand, We find in the distribution of the human Species, that the most fertile, as well as the most barren parts of the Earth are inhabited by Men of Complexions different from ours and from each other, from whence we may reasonably as well as religiously infer, that he, who placed them in their various Situations, hath extended equally his Care and Protection to all, and that it becometh not us to counteract his Mercies.

We esteem a peculiar Blessing granted to us, that we are enabled this Day to add one more Step to universal Civilization by removing as much as possible the Sorrows of those, who have lived in undeserved Bondage, and from which by the assumed Authority of the Kings of Britain, no effectual legal Relief could be obtained. Weaned by a long Course of Experience from those narrow Prejudices and Partialities we had imbibed, we find our Hearts enlarged with Kindness and Benevolence towards Men of all Conditions and Nations; and we conceive ourselves at this particular Period extraordinarily called upon by the Blessings which we have received, to manifest the Sincerity of our Profession and to give a substantial Proof of our Gratitude.

And whereas, the Condition of those Persons who have heretofore been denominated Negroe and Mulatto Slaves, has been attended with Circumstances which not only deprived them of the common Blessings that they were by Nature entitled to, but has cast them into the deepest Afflictions by an unnatural Separation and Sale of Husband and Wife from each other, and from their Children; an Injury the greatness of which can only be conceived, by supposing that we were in the same unhappy Case. In Justice therefore to Persons so unhappily circumstanced and who, having no Prospect before them whereon they may rest their Sorrows and their hopes have no reasonable Inducement to render that Service to Society, which they otherwise might; and also ingrateful Commemoration of our own happy Deliverance, from that State of unconditional Submission, to which we were doomed by the Tyranny of Britain.

Provided always and be it further enacted by the Authority aforesaid, That every Negroe and Mulatto Child born within this State after the passing of this Act as aforesaid, who would in Case this Act had not been made, have been born a Servant for Years or life or a Slave, shall be deemed to be and shall be, by Virtue of this Act the Servant of such person or his or her Assigns, who would in such Case have been entitled to the Service of such Child until such Child shall attain unto the Age of twenty eight Years, in the manner and on the Conditions whereon Servants bound by Indenture for four Years are or may be retained and holden; and shall be liable to like Correction and punishment, and intitled to like Relief in case he or she be evilly treated by his or her master or Mistress; and to like Freedom dues and other Privileges as Servants bound by Indenture for Four Years are or may be intitled unless the Person to whom the Service of any such Child Shall belong, shall abandon his or her Claim to the same, in which Case the Overseers of the Poor of the City Township or District, respectively where such Child shall be so abandoned, shall by Indenture bind out every Child so abandoned as an Apprentice for a Time not exceeding the Age herein before limited for the Service of such Children.

Provided always, That any Person in whom the Ownership or Right to the Service of any Negro or Mulatto shall be vested at the passing of this Act, other than such as are herein before excepted, his or her Heirs, Executors, Administrators and Assigns, and all and every of them severally Shall be liable to the Overseers of the Poor of the City, Township or District to which any such Negroe or Mulatto shall become chargeable, for such necessary Expence, with Costs of Suit thereon, as such Overseers may be put to through the Neglect of the Owner, Master or Mistress of such Negroe or Mulatto, notwithstanding the Name and other descriptions of such Negroe or Mulatto shall not be entered and recorded as aforesaid; unless his or her Master or Owner shall before such Slave or Servant attain his or her twenty eighth Year execute and record in the proper County, a deed or Instrument securing to such Slave or Servant his or her Freedom.

And be it further enacted by the Authority aforesaid That in all Cases wherein Sentence of Death shall be pronounced against a Slave, the Jury before whom he or she shall be tried shall appraise and declare the Value of such Slave, and in Case Such Sentence be executed, the Court shall make an Order on the State Treasurer payable to the Owner for the same and for the Costs of Prosecution, but in Case of a Remission or Mitigation for the Costs only.

And be it further enacted by the Authority aforesaid, That no Man or Woman of any Nation or Colour, except the Negroes or Mulattoes who shall be registered as aforesaid shall at any time hereafter be deemed, adjudged or holden, within the Territories of this Commonwealth, as Slaves or Servants for Life, but as freemen and Freewomen; and except the domestic Slaves attending upon Delegates in Congress from the other American States, foreign Ministers and Consuls, and persons passing through or sojourning in this State, and not becoming resident therein; and Seamen employed in Ships, not belonging to any Inhabitant of this State nor employed in any Ship owned by any such Inhabitant, Provided such domestic Slaves be not aliened or sold to any Inhabitant, nor (except in the Case of Members of Congress, foreign Ministers and Consuls) retained in this State longer than six Months.

Provided always and be it further enacted by the Authority aforesaid, That this Act nor any thing in it contained shall not give any Relief or Shelter to any absconding or Runaway Negroe or Mulatto Slave or Servant, who has absented himself or shall absent himself from his or her Owner, Master or Mistress, residing in any other State or Country, but such Owner, Master or Mistress, shall have like Right and Aid to demand, claim and take away his Slave or Servant, as he might have had in Case this Act had not been made. And that all Negroe and Mulatto Slaves, now owned, and heretofore resident in this State, who have absented themselves, or been clandestinely carried away, or who may be employed abroad as Seamen, and have not returned or been brought back to their Owners, Masters or Mistresses, before the passing of this Act may within five Years be registered as effectually, as is ordered by this Act concerning those who are now within the State, on producing such Slave, before any two Justices of the Peace, and satisfying the said Justices by due Proof, of the former Residence, absconding, taking away, or Absence of such Slave as aforesaid; who thereupon shall direct and order the said Slave to be entered on the Record as aforesaid.

And Whereas Attempts may be made to evade this Act, by introducing into this State, Negroes and Mulattos, bound by Covenant to serve for long and unreasonable Terms of Years, if the same be not prevented.

Be it therefore enacted by the Authority aforesaid, That no Covenant of personal Servitude or Apprenticeship whatsoever shall be valid or binding on a Negroe or Mulatto for a longer Time than Seven Years; unless such Servant or Apprentice were at the Commencement of such Servitude or Apprenticeship under the Age of Twenty one Years; in which Case such Negroe or Mulatto may be holden as a Servant or Apprentice respectively, according to the Covenant, as the Case shall be, until he or she shall attain the Age of twenty eight Years but no longer.

Enacted into a Law at Philadelphia on Wednesday the first day of March, Anno Domini One thousand seven hundred Eighty
Thomas Paine, Clerk of the General Assembly